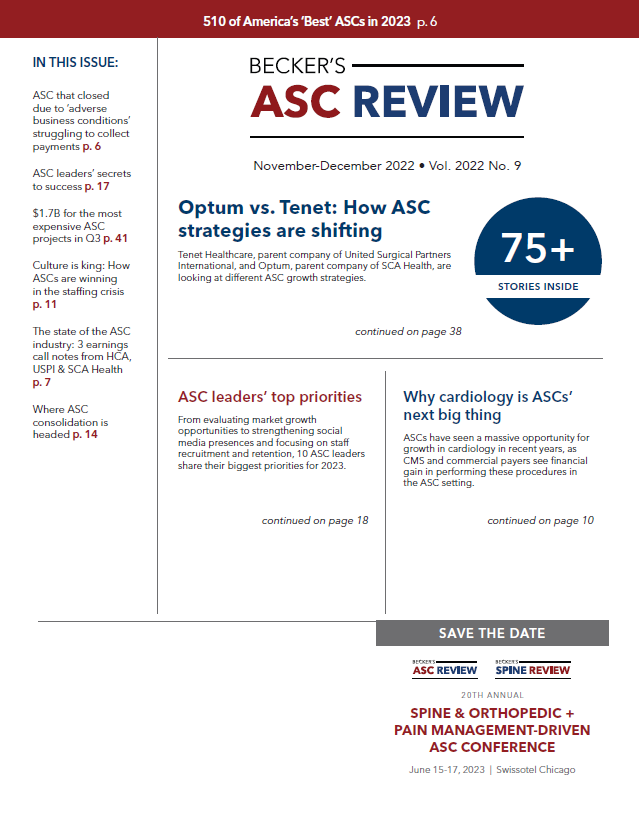 ASC that closed due to 'adverse business conditions' struggling to collect payments
The Surgery Center of Fort Collins (Colo.) is working on collecting past due bills more than two months after it announced it was closing for good, BizWest reported Oct. 26.

Culture is king: How ASCs are winning in the staffing crisis
While ASCs in many markets can't compete with hospital salaries, many are coming out on top with creative recruiting strategies and a positive work environment.

Why cardiology is ASCs’ next big thing
ASCs have seen a massive opportunity for growth in cardiology in the last few years, as payers and CMS see financial gain in performing these procedures in the ASC setting.

510 of America’s ‘Best’ ASCs in 2023: Newsweek
Newsweek partnered with global research firm Statista for the 2023 edition of its "America's Best Ambulatory Surgery Centers," which ranks 510 of the more than 5,000 Medicare-certified ASCs in the country

ASC that closed due to ‘adverse business conditions’ struggling to collect payments
The Surgery Center of Fort Collins (Colo.) is working on collecting past due bills more than two months after it announced it was closing for good, BizWest reported Oct. 26.

Kaiser Permanente may convert San Jose hospital into ASC
The health system is considering multiple options, the report said. Among them are demolishing the 242,900-square-foot hospital and adding surface parking; decommissioning and vacating it; and repurposing 149,000 square feet for outpatient surgery, with the remainder left vacant.

All of society has suffered financially’: How ASCs are navigating physician pay changes
As inflation and the cost of running a practice rises, CMS's Medicare physician fee schedule proposed rule for 2023 suggests further cuts to physician pay.

Prior authorization: 3 leaders’ thoughts by patsy newitt
Seventy-nine percent of medical groups said that payer prior authorization requirements increased in the last year, according to a March poll conducted by the Medical Group Management Association

‘The proof is in the results’: 1 physician’s perspective on MSO partnerships
Showing the value proposition of deals and having physician leadership from the top down can help management service organizations draw interest from independent practices, according to Emil Engels, MD, CEO of Aligned Orthopedic Partners.

Medtronic to spin off 2 businesses
Medtronic plans to separate its combined patient monitoring and respiratory interventions businesses, which are part of the company's medical surgical portfolio.

Where GI execs are seeing the greatest opportunity
Here are three key areas within gastroenterology where leaders such as U.S. Digestive Health CEO Jerry Tillinger believe opportunity is ripe

The future of gastroenterology: 5 leaders’ insights
From new technologies to physician autonomy, here are five leaders' perspectives on where the GI industry is headed.

Gastro Health, GI Alliance and more: 8 industry updates
Here are eight updates on gastroenterology companies Becker's reported on during the third quarter of 2022:

5 biggest ASC deals in Q3
Here are the biggest deals in the third quarter of 2022 that ASC leaders need to know:

I don’t know how much longer I can continue to be a doctor’: Physicians fight pay cuts as operating costs soar
Physician owners are struggling to meet margins as they face skyrocketing operating costs and consistent pay cuts.